The envelope. The ubiquitous envelope.  The famous bill-containing window-type envelope.
Americus F. Callahan of Chicago, Illinois, received the first patent for a windowed envelope on June 10, 1902. Originally called the "outlook envelop", the patent initially anticipated using thin rice paper as the transparent material forming the window, though this material has since been replaced by clear plastics. The design has otherwise remained nearly unchanged for 112 years. Now it has been recently judged, albeit erroneously,  a window into a complete panoply of one’s  private credit, or shall we say one’s collection on-goings, not by showing a name-which, of course is allowed, but by showing one of over 4000 collection agencies’ or attorneys’ proprietary,  unknowable and esoteric  identification number . 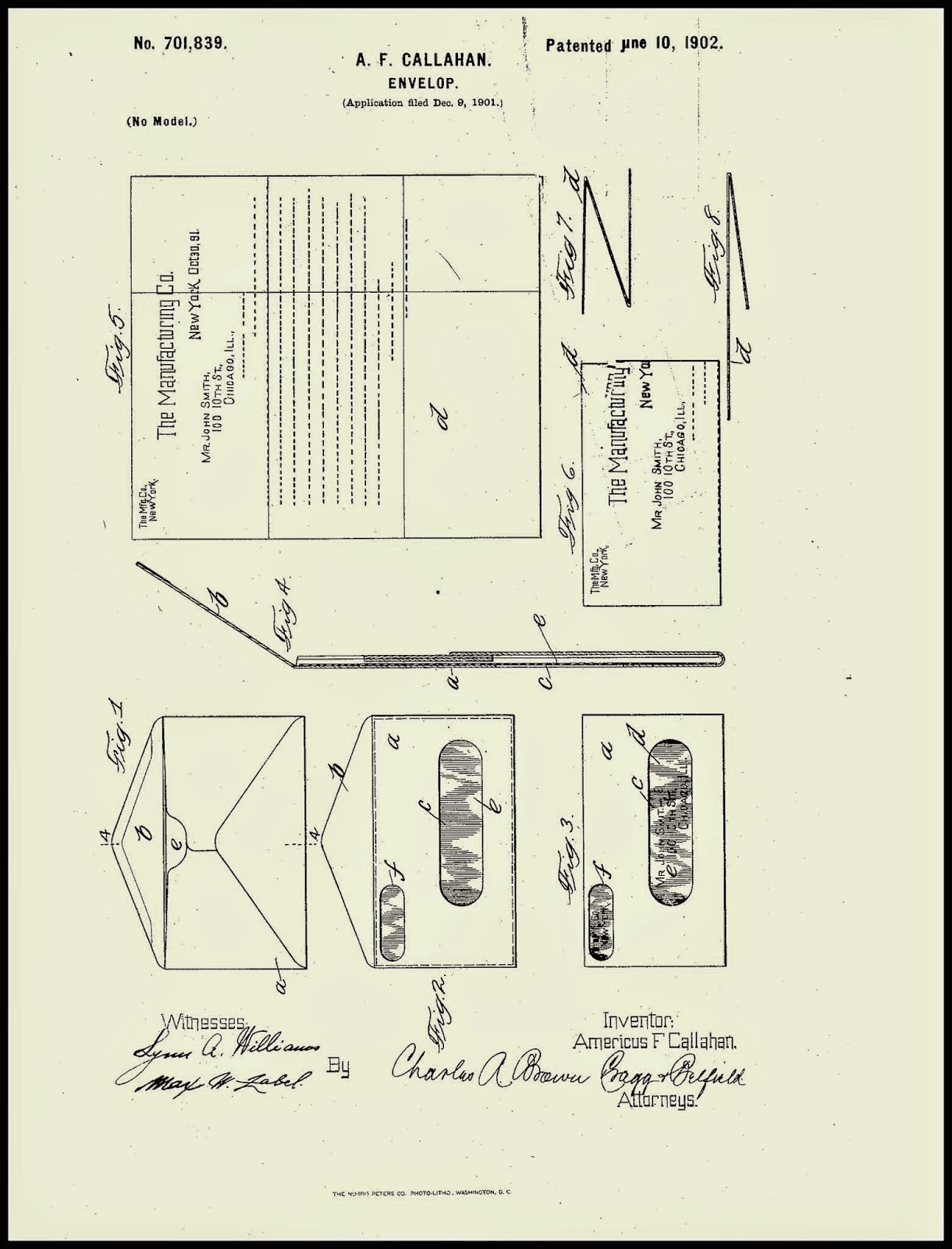 In the federal policing of collection agencies and collection attorneys (over which virtually no one would shed a tear)  , the sometimes arcane and convoluted world of the Federal Fair Debt Collection Practices Act (PL. 95-109), the eleven decade old window envelope has finally been adjudicated a menace to privacy*.

This ruling does not affect the consumer's HIPAA privacy of health insurers' mail--or payments, or current 41 pounds of junk mail each person in the US receives every year (gulp, 100 million trees), but rather creditors’ third party representatives--collectors and lawyers, who attempt U.S.  Mail communication regarding consumer debts.  (Phone is a whooooole ‘nother but equally litigious problem)

Since 1978 the law has been basically a victim of the boiled frog theory. On its face, and on first reading, it appeared fair (the ironic first word in its name) for both consumers--the author was in the business pre-1978 and will attest that the industry  was unrestrained to say the least-- as well as legitimate collection agencies and attorneys—but what a gold mine for the manufacture of predatory legal community members’ fees.

Every time this law evolves via a hyper-sensitive ruling like the one mentioned above-specifically Douglass v. Convergent Outsourcing, 765 F.3d 299 (3d Cir. 2014), it’s another windfall for the legal representatives and their attendant and arbitrary “fees”.  Let’s face it, there is a place for this line of reasoning written into the law: notations such as government agency, important, immediately, now, can not only violate both the letter and the spirit of the law in making a consumer anxious and apt to react not in their best interest or worse—side-stepping the “least sophisticated” consumer’s right to dispute. In the 1970’s that we remember, by firsthand knowledge,  much worse was written on envelopes—thus the congressional thinking was to address this particular problem in the legislation.
However a proprietary and nondescript number appearing on the envelope has not harmed the debtor—nor does the debtor even know he was harmed until, with this ruling, a legal advisor informs him that, yes; he was indeed harmed and by law, could recover $1000.00 for their suffering. Wink, wink, nod, nod. “…You know, now that I think of it, yes, yes, I was harmed by the number ‘172883-182HHG-18-8-3G’, my  neighbors, any the public seeing the letter and my postman all may know that’s a collection agency or legal-type number” –shall we get started and sue?

Would it be wrong in stating the vast majority of suits have swept up legitimate agencies in minor and technical cases such as the above? Maybe. Also, there are probably hundreds of thousands of threats of lawsuits that were settled with the debtor’s legal advisor and never made it to the filing, or court argument stage. One attorney requested $5000.00 from our company, ten years ago for specious violations of the law—where it doesn’t even apply-on a commercial (business to business) case!

Even the consumer is affected by exorbitant legal costs

There have been times when too-precise wording and [mis-] interpretation by the consumer may have been detrimental to their situation. One such example, of many, is when they believe that if they tell the third party collector to cease and desist albeit with no explanation as to why, the collector will simply put their tail between their legs, close the file and go away. The reputable collector will cease;  but for fear of possible lawsuit, and to still protect the balance his client is claiming, he may recommend that his client, the creditor to whom the consumer allegedly owes money, that a lawsuit be instituted—thus causing increased time and expense for all parties, including the court system.

George Bernard Shaw, in a play in 1906, first wrote the phrase, “All businesses are deemed conspiracies against the laity”-a very applicable quote to think about in your own business dealings—whatever they may be.
Is collection, by its definition and purpose more so? It is extremely doubtful-but arguable. Enter “car dealers” (an oft-derided industry) in your favorite search engine.  Not bad—many ads for dealers and deals. Then enter “debt collection.” Quite a Big difference. Debt collection searches yield all the ways a lawsuit or threat thereof will “stop them in their tracks” and assuage the debt. In fact, if the proper word string is typed in, you may get a particular attorney in New York who has made  YouTube videos where he has dubbed in individually, virtually  every collection agency and collection attorney in the metropolitan area (how did he find the time?). So the video says in effect (paraphrasing), “Have you been contacted by [xyz agency] recently? We will protect your rights and bring them to justice for their violations of the FDCPA” Or some such speciousity.
Be aware that of the hundreds of thousands of lawsuits that have entered against collection agencies in the federal court system since 1978, there have indeed been numerous bad actors in the collection business—as in all businesses, and members of the collection trade association ACA International would be glad to root them out so all are not painted with the same brush. This could happen via an onerous suit or after numerous real violations, or their being dropped by their insurance company or Secretary of State Bonding Division—or in more egregious violations, the state attorney general.

The Fair Debt Collection Practices Act, 15 U.S.C. §1692f(8) (“FDCPA”), forbids debt collectors from putting on the envelopes of debt collection letters “any language or symbol, other than the debt collector’s address.”

* In Douglass v. Convergent Outsourcing, 765 F.3d 299 (3d Cir. 2014), the debt collection agency mailed the consumer a collection notice that contained the consumers' name, address, and a sequence of letters and numbers in (some accounts say a) “misaligned” clear plastic window on an envelope and poorly formatted letter, that let a QR Code (barcode) and a bare account number show used by the collection agency to internally track the consumer's collection account.

All of this information, including the internal tracking number, showed through the address window of the envelope. The Third Circuit ruled that the disclosure of the consumer's account number on the face of the debt collector's envelope was an impermissible language or symbol, which violated § 808(8) of the FDCPA.

The court was not technically wrong, only misguided. Keep those windows clean! 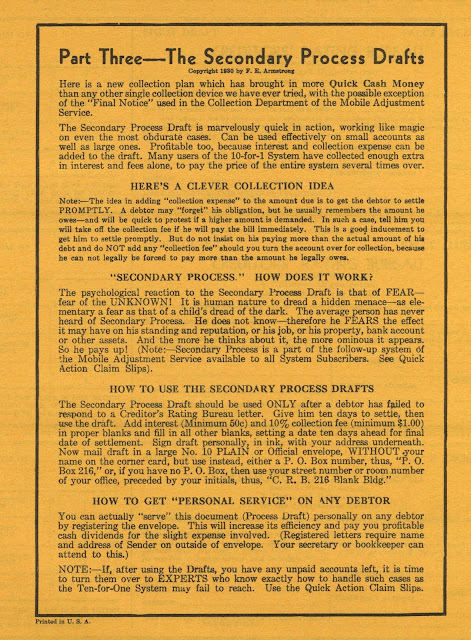